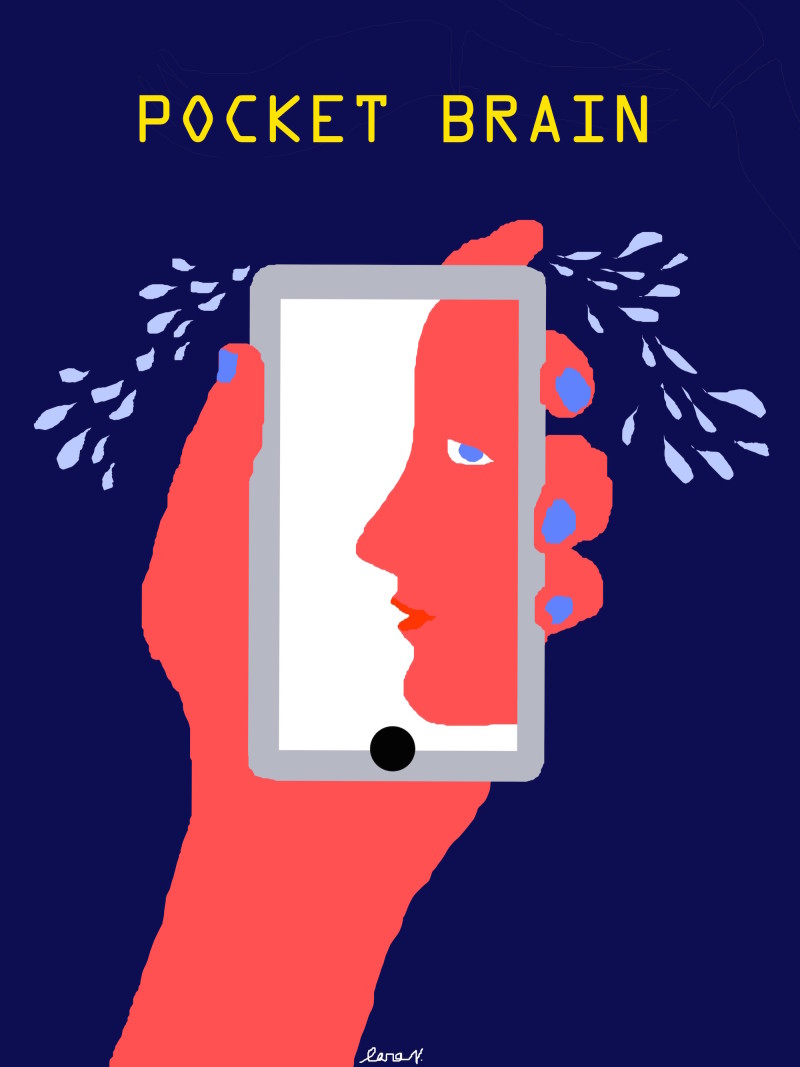 Early on in the history of photography, photographs were relatively costly and their applications were relatively limited. Photographs used to be objects for family albums, meant to capture important milestones in our lives. It can be said that quality once prevailed over quantity. Today, the opposite is true. Digital images are virtually cost-free and their applications are relatively limitless. Photographs have become a collection of pixels on a screen, an immaterial product, that are part of a numerical amnesiac culture in constant progression.

Our moment-to-moment experience of our surroundings has shifted from viewing the world around us to seeing the world as captured in digital media. The ubiquity of images made, consumed and viewed on touch screens has relieved us of our solitude, on the surface, while further alienating us from each other. The internet has expanded our potential for global communication and dissemination of information, yet the daily mania of collecting, sharing, and reframing images has, for a growing number of people, effectively replaced actual human interaction. We create anthologies of our lives by photographing everything we experience. We maintain, update, and modify our personal digital mythologies, and make this surfeit of images accessible to everyone else via social media, as if the fear of forgetting moments of our lives has become an ongoing fear of being forgotten as we live.

Cell phones are the new guardians of our collective consciousness. They are rapidly replacing our mental memories as we each carry around, at all times, our personal “Pocket Brain.” Selfies are the primary means of self-reportage via the pocket brain. The selfie is a social palliative for the human condition. We use selfies to define ourselves in the eyes of others. It has become a competition of sorts. Who is looking the best and experiencing the best experiences in our particular social media circles? As if to say “I am here and here and here,” while asking, “Where are you and you and you?” The act of taking a selfie in a social setting replaces the actual experience with an image that proclaims our presence at the given event. The selfie is a means of projecting a fictional sense of belonging and influence, which can be edited ad infinitum as we seek to document our “best” selves, simplifying our identities in two dimensions, not necessarily reflecting the inherent complexity of our lives.

We are concerned with the momentum of voluntary self-immersion in social media in our culture today. The video project we propose is a portrait of a manic internaut named Cookie who is addicted to her “Pocket Brain.”
She is the near future now. 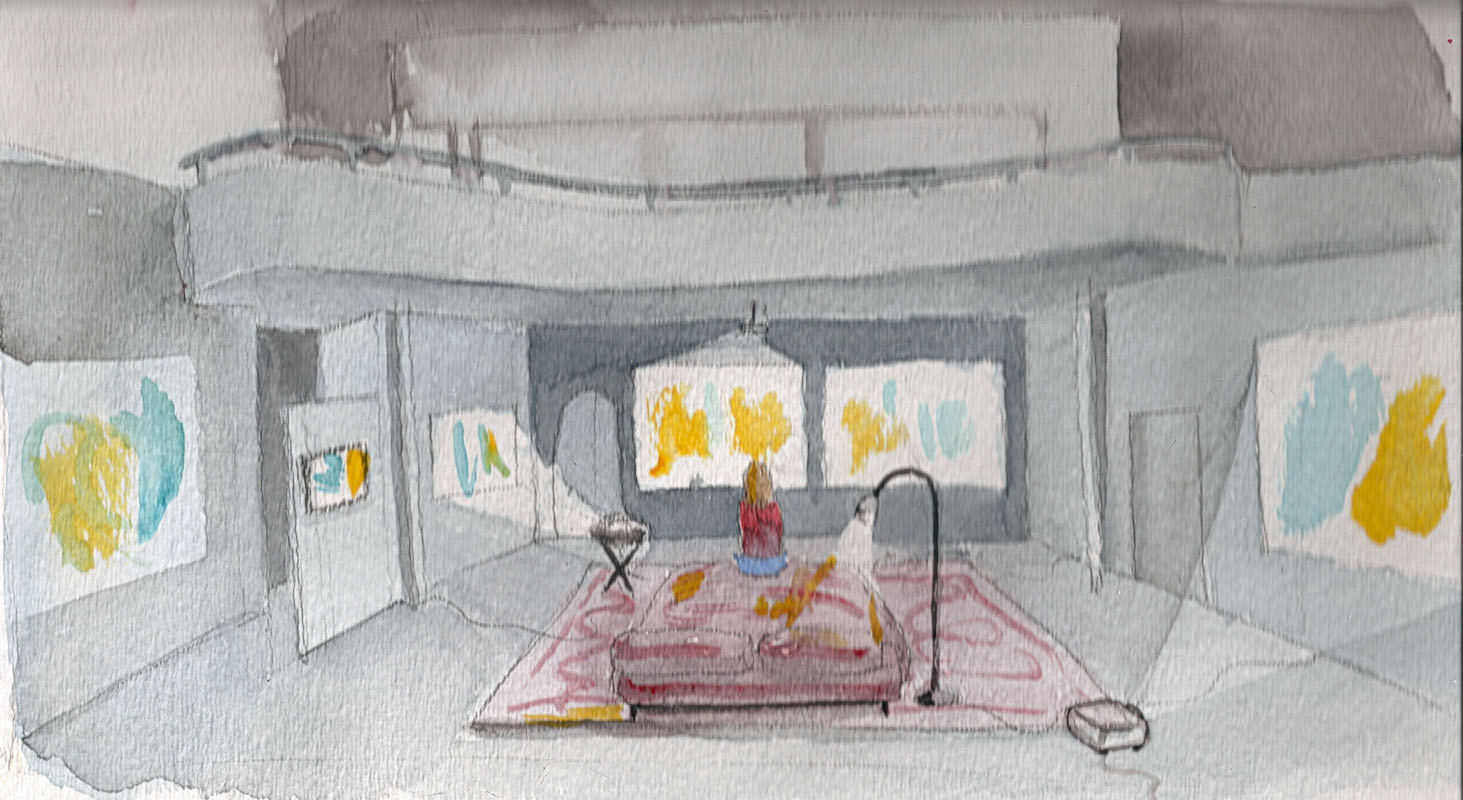 Cookie’s home is a virtual observatory, a sensory-overload chamber.
Her bed is in the center of a white box.
Projections of computer desktops dominate each wall.
She is engaged with the internet at all times- Facebook, Instagram, Twitter, Google, Skype, YouTube, Vimeo, etc…. 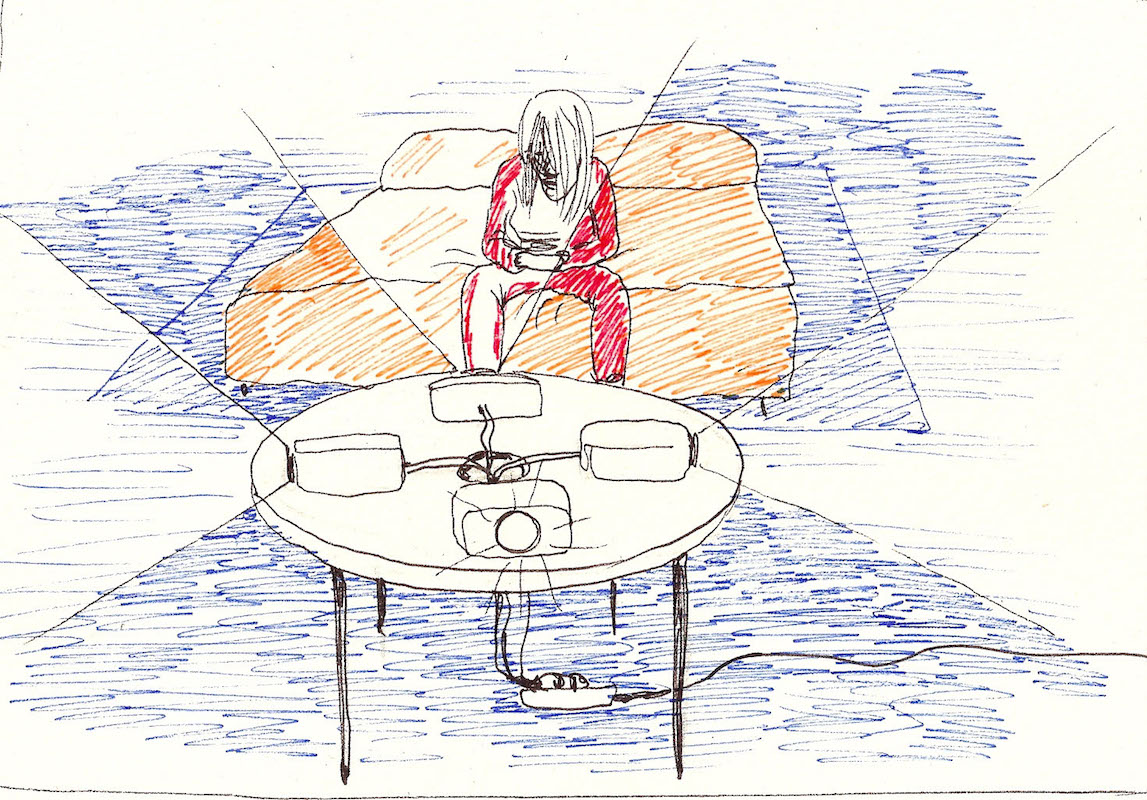 She is always connected. She prefers to see the world through her devices. She is a caricature of the moment.
Cookie receives an invitation via Facebook to her new friend Victor’s birthday party at The Space Bar. She decides to go. 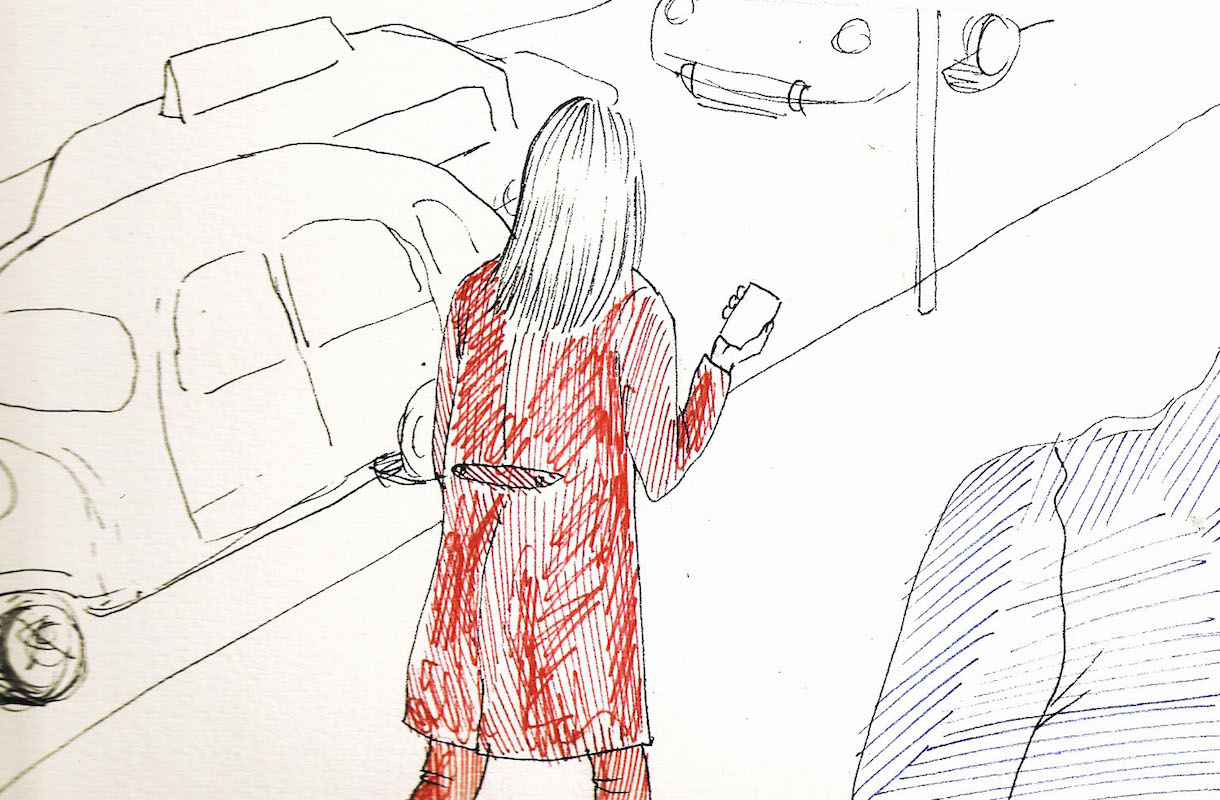 She is always alone, even when in public.
She walks to the train, never looking up from her phone.
Just about everyone she passes is doing the same. 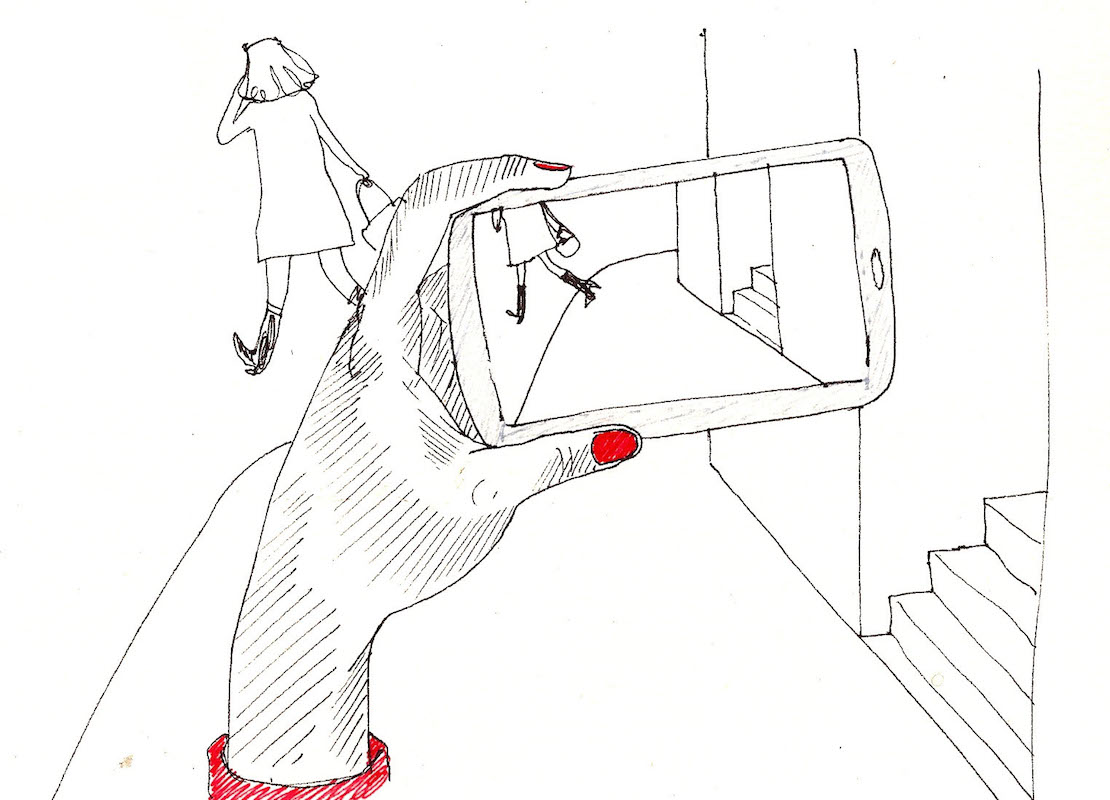 As Cookie heads to the party at The Space Bar, she films the pedestrian walking ahead of her. 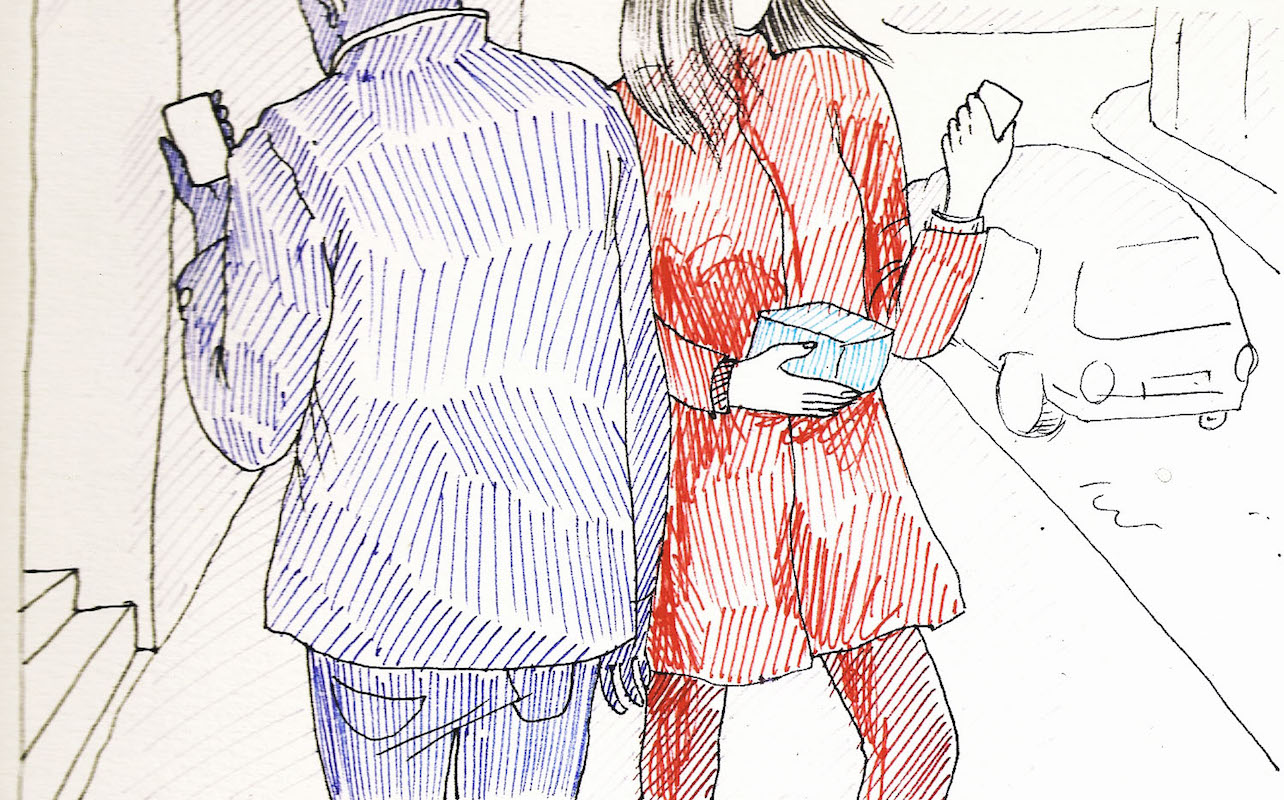 She is carrying a gift box in her free hand.
She bumps into a guy who is filming his own feet.
Cookie almost drops the box. 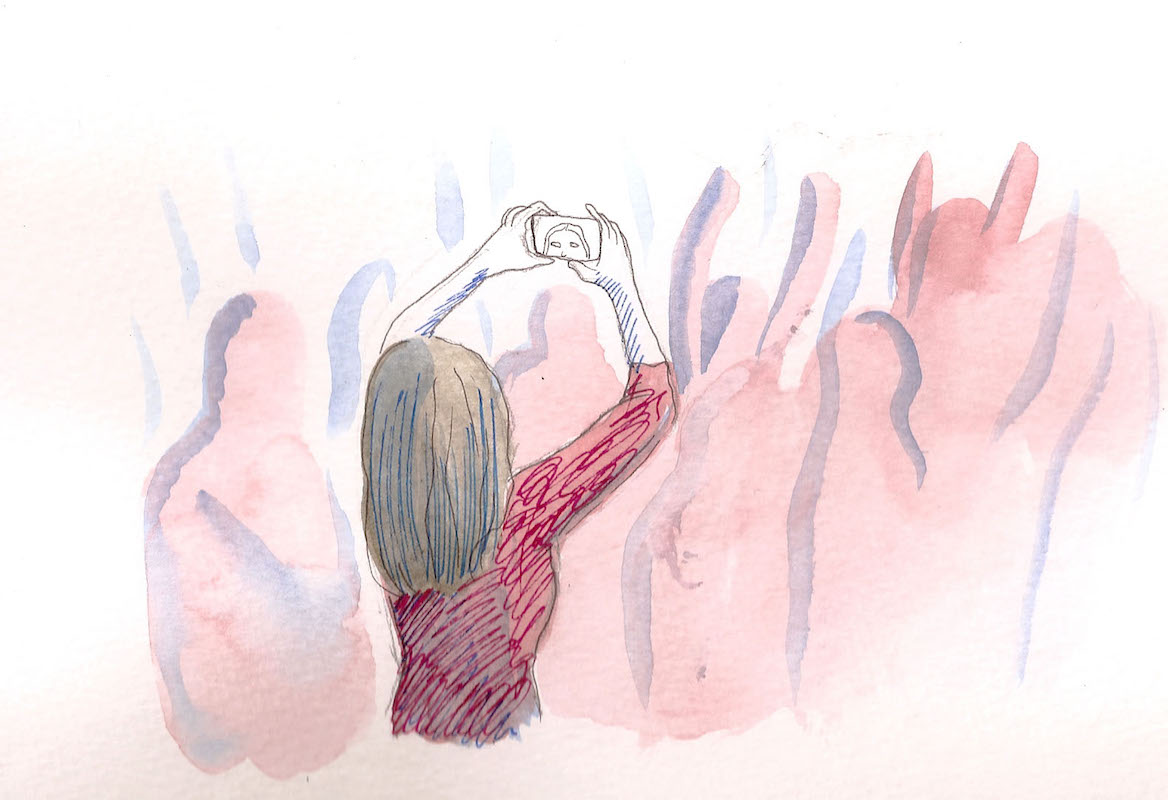 At The Space Bar, Cookie keeps very much to her cell phone. She gets up, dances with it, and takes a selfie. 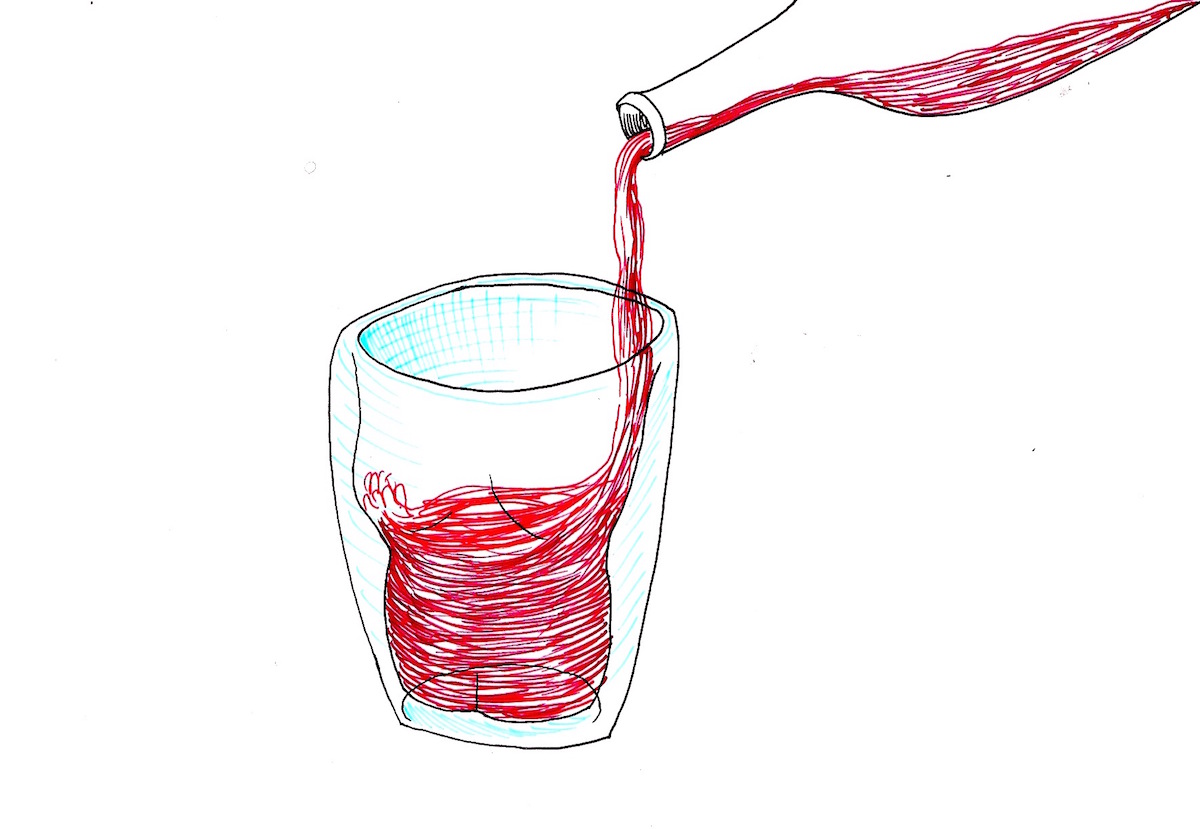 At the same moment, the guest of honor takes a massive red shot in a light blue glass, then collapses, in the background.
Cookie has captured the moment of the apparent murder on her pocket brain. 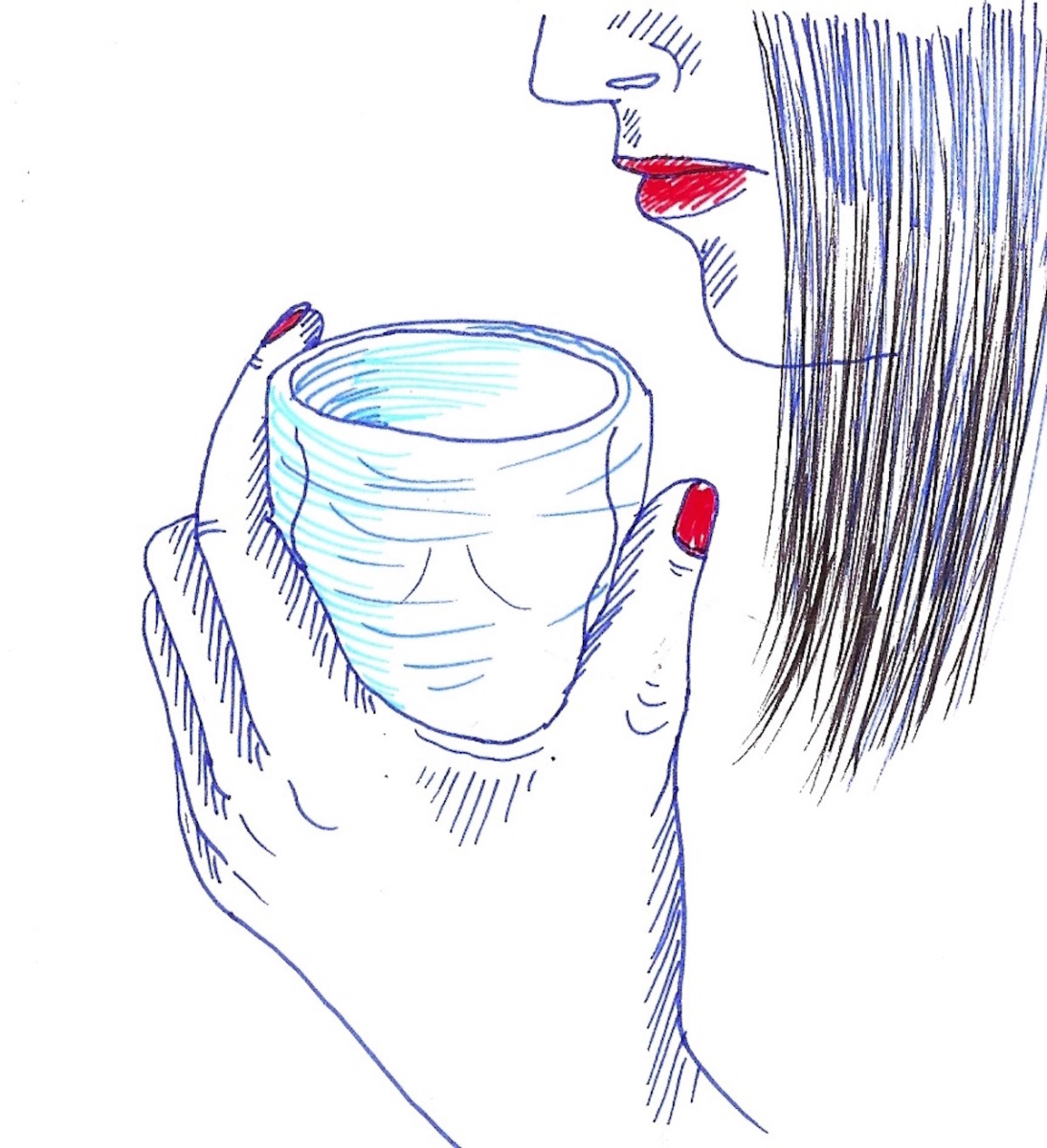 Cookie grabs the light blue glass and slides out of The Space Bar.
A large man pauses to watch her leave. 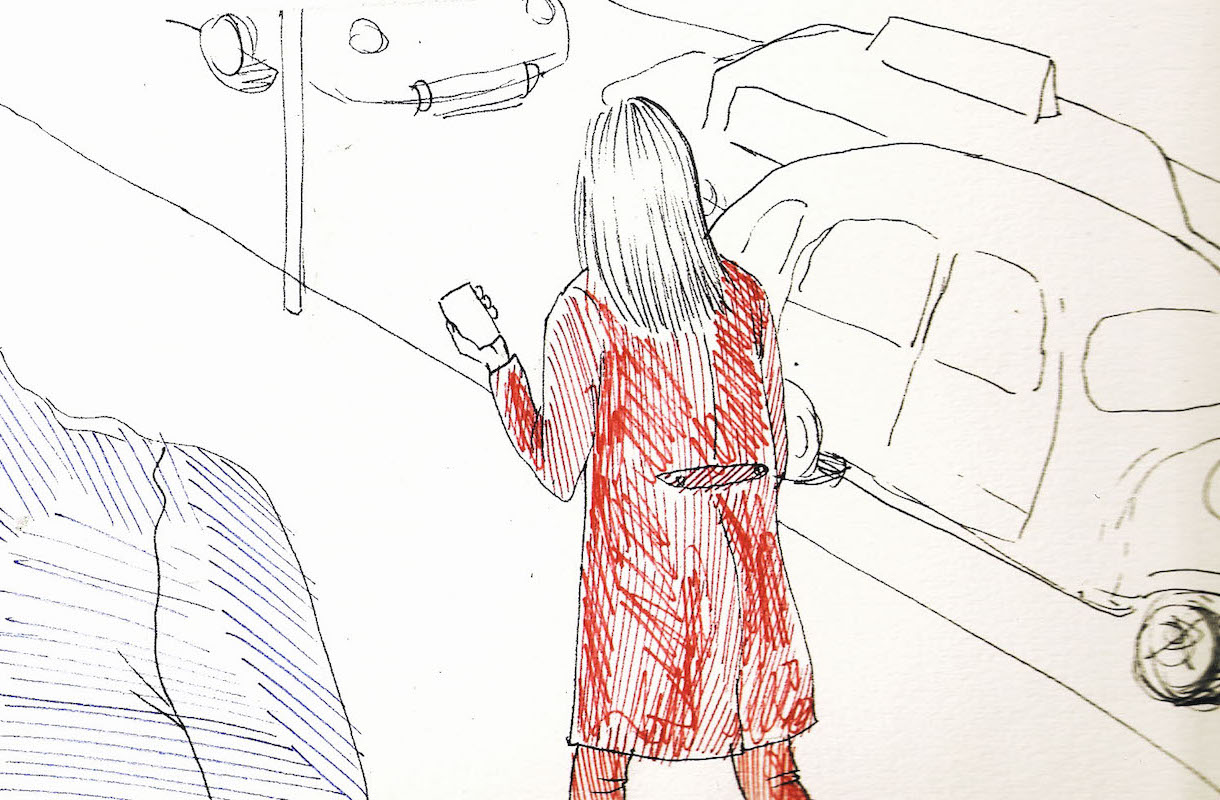 As she rushes home, she swipes through the camera roll from the party, looking for a clue as to what happened. 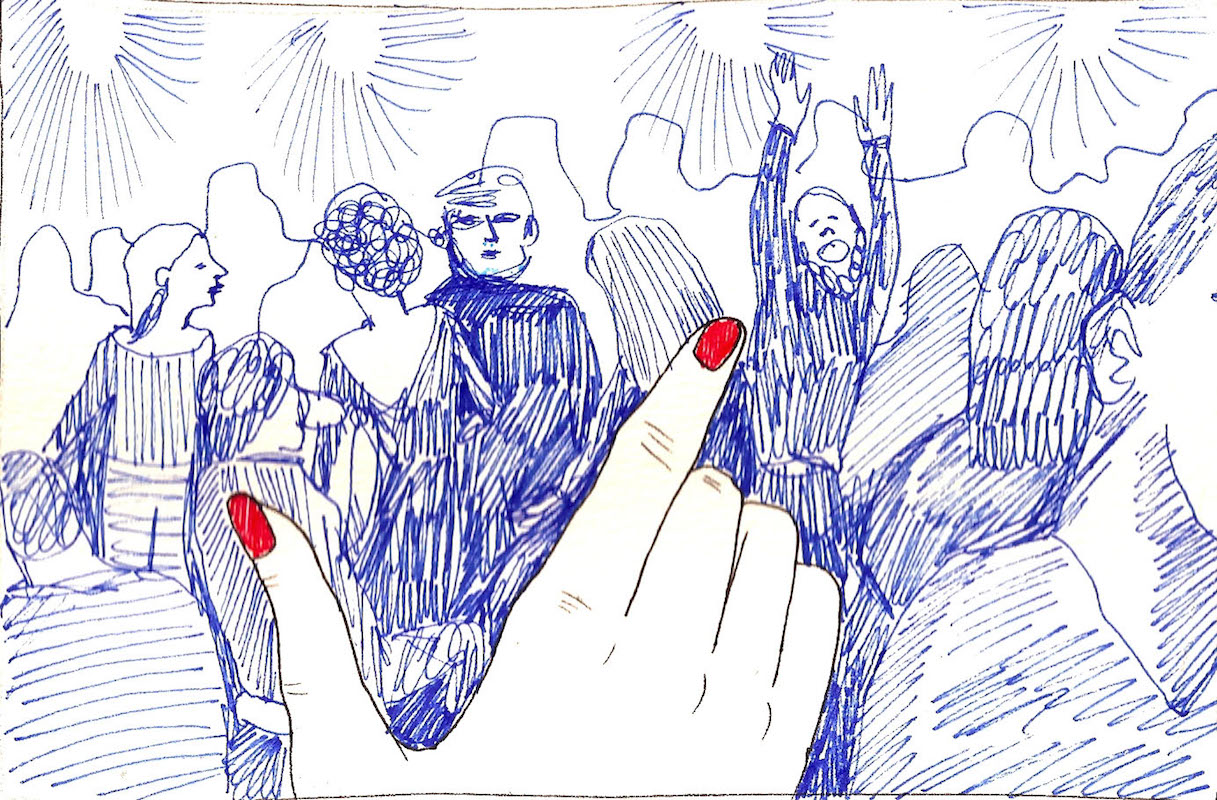 Back at home, Cookie projects the images from the bar on the walls of her room.
She swipes through the images.
She stops at the last clear selfie in which the victim took the fatal shot.
She zooms in and out of the gigantic photo, and finds a face which is looking right into the lens.
It is the same large man who watched her sneak out of the bar.
Cookie is immediately suspicious of this man. 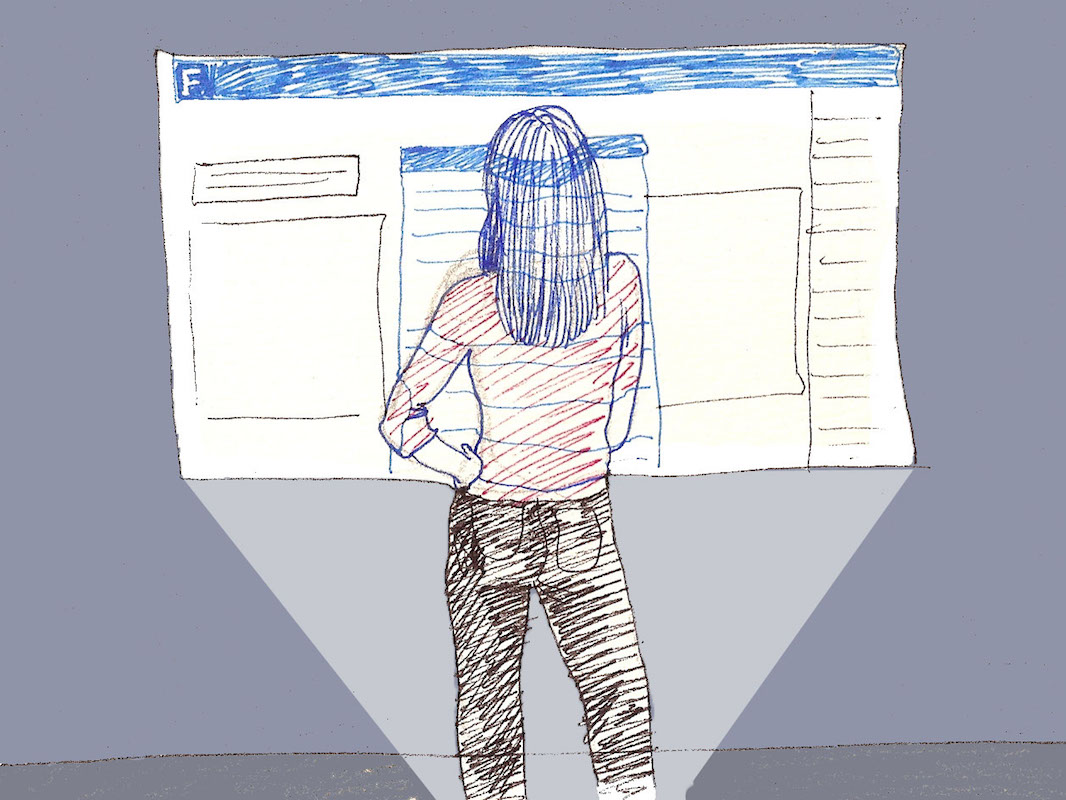 She decides to post the photo on her social media and to tag Victor the Victim, hoping that someone will tag the mystery man. Her wall projectors stay fixed on the photo posts.
Without regard for the potential impact of her assumptions, she may be placing herself in mortal danger.
Is this all just a figment of her imagination or is she on the verge of solving a crime? 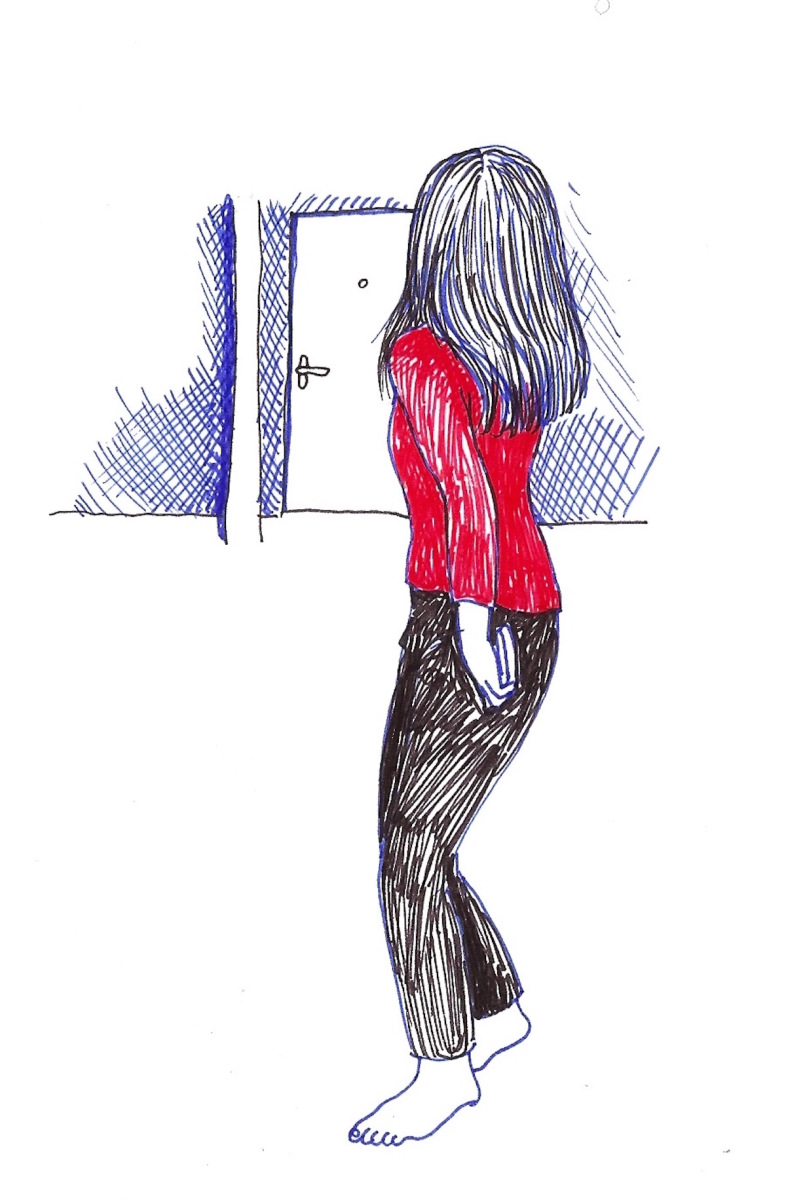 Time passes. Someone tags the mystery man. Cookie jumps up to see who he is. She picks up the light blue glass.

At this moment someone rings her doorbell. 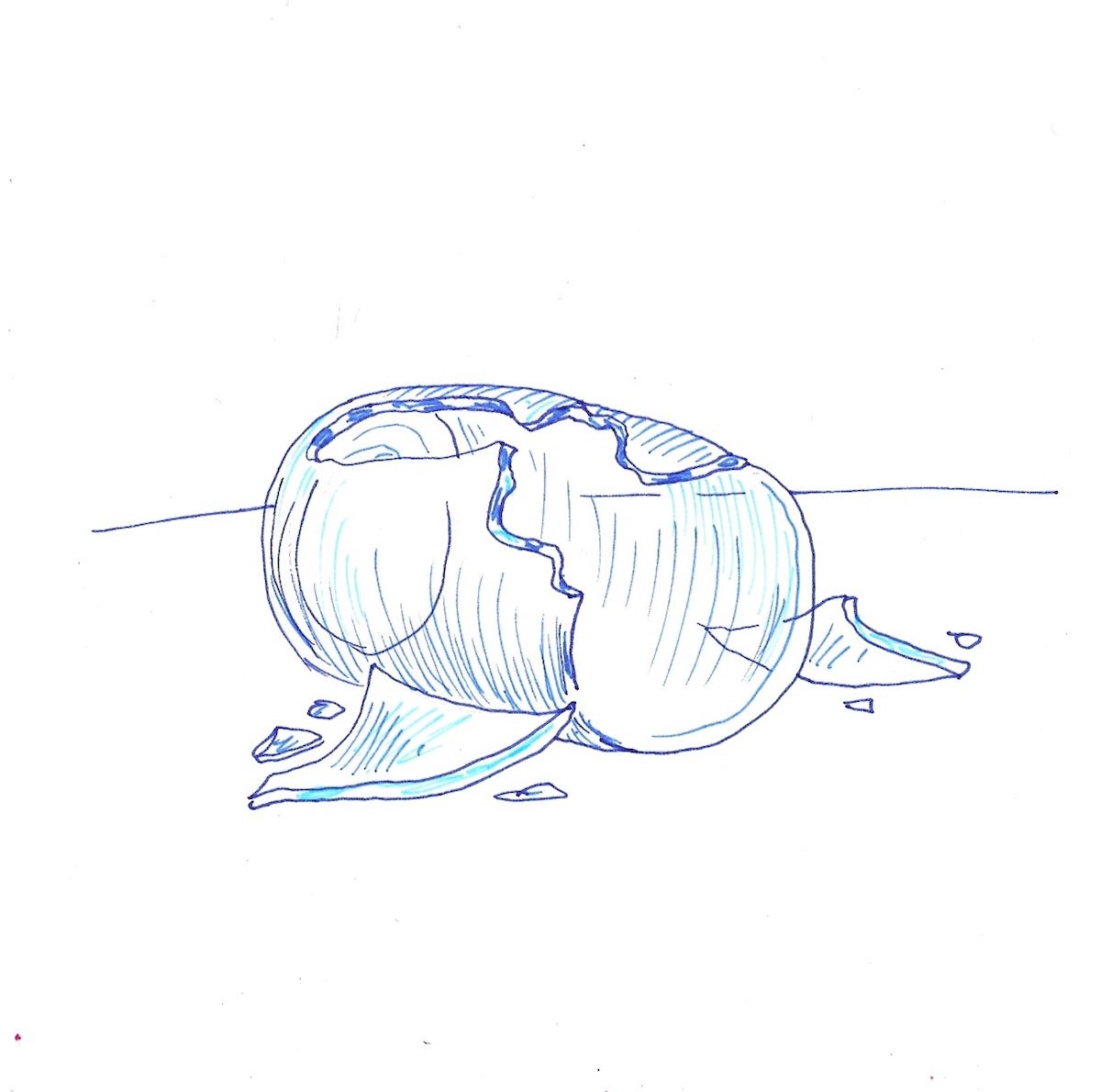 She drops the glass. It shatters. 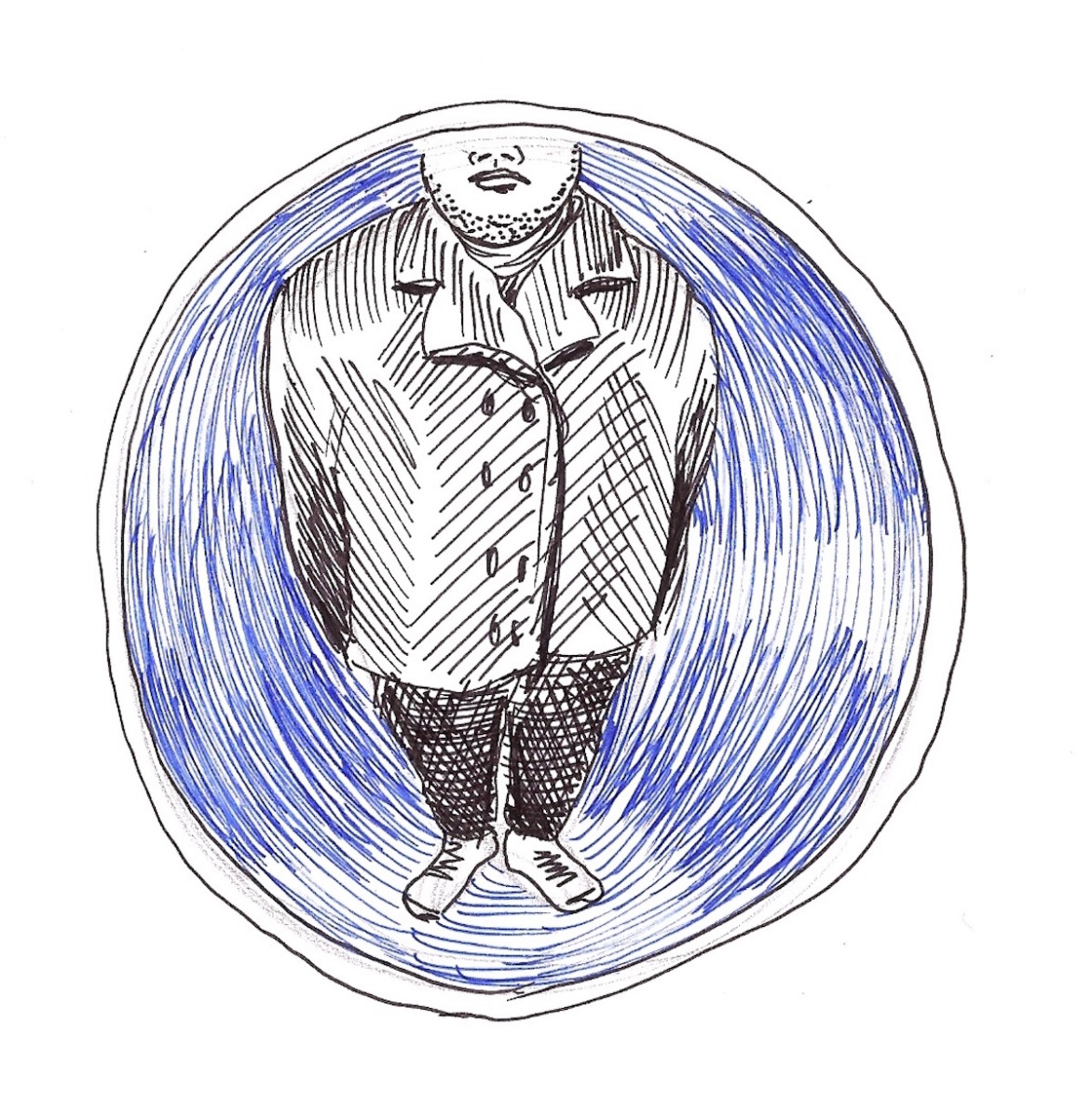 There is a large man standing right outside. He begins knocking….
THE END.

Rhasaan Oyasaba Manning is a native Brooklynite, born, raised, and presently residing in Flatbush, with a BA in Architecture from Yale University. He is a producer, director, musician, photographer, writer, actor, editor and conceptual social artist. His work focuses on duality, inversion, nihilism, self-destruction, and the struggle for freedom from these forces, which he sees as the only choice. Manning plans on collaborating with Lara Vallance on this project. Vallance is a French visual artist finishing her MFA in Montréal at UQAM. The theoretical focus of her work is the potential for drawings punctuated by layered detail, from photographs, often found at random, to reflect the ubiquity of images nowadays, while inviting the viewer to experience a slowing of the pace of their perception (laravallance.tumblr.com). Some of our past collaborations are online at: http://www.oyasaba.com/category/film/oyasaba-music-videos/

The Pocket Brain is also being developed as an installation piece, which aims to transform a gallery/storefront space into our protagonist’s dwelling. The short film we propose will be a vital element in the installation.